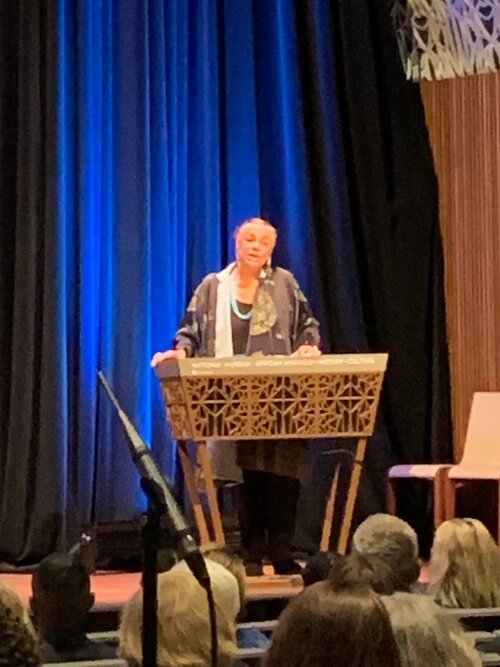 What an extraordinary evening! Thank you to our eloquent and compelling speakers and thank you for the rich and rigorous conversation that you collectively wove together. Your voices were enhanced by our being in this magnificent place, the Museum of African-American History and Culture. At this time when fake news, lies, and deceit are the new normal, the Museum is itself counter-cultural in its mission as it reaches out its arms to the community, across the separations and walls that divide us, across the yawning abyss of ignorance, grievance, and mistrust… teaching the history still not taught in schools, uncovering, rewriting, and enhancing the historical record…turning flat two dimensional black caricatures into fully realized human beings, opening up conversations formerly forbidden, celebrating the strength and endurance, the grit and grace of our forbearers, looking backwards into the future.

With the Museum as backdrop and with the ancestors looking on, we were witness tonight to a robust encounter that illuminated some of the powerful dimensions of the AFRE Fellows Program; a program designed to produce a “long-term network of diverse leaders dedicated to building a just and inclusive world free of anti-black racism and white supremacy.” Let me draw out four currents of tonight’s conversation and the AFRE program that I believe contribute to its special place on the social justice landscape.

First, on stories: AFRE knows the importance of harvesting the stories—particularly the stories of those whose lives have been largely invisible, whose voices have been muted or silenced; those who have remained in the shadows of the historical record. We know that there is never a single story to be told, there are myriad stories, and we must be vigilant in listening for the various and dissonant strains… we know that context matters, our individual and collective narratives are shaped by the historical, political, and cultural settings… and stories well-told always focus on the particular; when we mine the particular we discover the universal, stories weave the tapestry of human connection… narratives offer frames for naming, knowing, and transforming human experience and provoking social change. Storytelling is central to our quest for social justice.

Second, border crossings are revelatory. On this 400th Anniversary of colonial slavery, we marks its legacy and its wounds in the United States and South Africa through establishing an enduring Trans-Atlantic relationship that is baked into the structure and programs of AFRE, allowing us to mine the challenges and contradictions that are unique to each historical and cultural landscape and those that are shared, lived experiences of oppression, inequality, and white supremacy. In navigating the border-crossings we need to be open to, and respectful of, the differences in language and culture, rituals and norms, mindful of the small things that make a big difference in our ways of seeing, naming, and knowing who we are and who we are becoming. In confronting the barriers to liberation and justice in both countries, we also discover the need for other boundary navigations…across disciplines, fields, and domains, across generations… blending theory and practice, analysis and activism, art and science, scholarship and story, the digital and the face-to-face, the local, the national, and the international… and we learn that productive discourses that cross borders require attentive listening and empathy, candor and authenticity, courage and vulnerability, mutual respect, expressivity and restraint.

Third as we tell our stories and navigate border crossings, as justice seekers we remember to search for the good, the strong, the resilient. We resist the persistent preoccupation—found in research and scholarship, in public policy and discourse, in popular culture—a preoccupation with studying down and highlighting pathology and disease… such a preoccupation leads to cynicism and inaction, limits our imagination, and bleeds into blaming the victim. A search for goodness—always data driven, always with a healthy dose of skepticism—allows us to honor human agency and capacity, helps us see that success is usually incremental and reveals itself in myriad forms, and lets us recognize that the best informants of what is working are those who are engaged in making and creating it.

Fourth and finally—and I confess this is the lens through which I regard all of the Atlantic Fellows programs—at its very center, AFRE is a human development program; a learning space, nourished by curiosity, imagination, restive risk-taking, openness to change. The learning emerges most fruitfully in community, through open dialogue and collaboration, through finding the edges of one’s individuality and identity by rubbing up against folks who are different, through creating a safe environment where people can risk vulnerability, and feel free to challenge and critique one another. The solo trajectory of individual development becomes a chorus of community learning—laced with harmony and dissonance, silence and cacophony—a chorus that changes and gets magnified over the years as AFRE Fellows become Senior Fellows and then join with Atlantic Fellows all over the world, under the umbrella and anchor of the Atlantic Institute, in order “to advance opportunity and promote equity and dignity for all people, especially in places where systematic barriers unfairly hold them back”… justice warriors doing the work, making a difference.

I see the tributaries of each of these Atlantic Fellows programs swelling into a MIGHTY RIVER, sustained by a singular devotion to eradicating inequality and oppression all over the world; joining arms, finding common cause, lifting up our voices, challenging the status quo, harvesting the lessons, remaining humble and vigilant. As the Atlantic Philanthropies winds down and exits, as we begin to see the fruits of our huge investment, our well-placed bets, the Atlantic Fellows Programs rise up and take their place on the landscape. We let go and you take hold. There is trust, commitment, and hope in the passing of the baton; there is gratitude for the work already accomplished and anticipation of the multitude of brothers and sisters in the struggle who will in the years to come wade into the waters of the mighty river. I close our amazing evening with my favorite poem by Langston Hughes who extols the majesty and power of the river.

I‘ve known rivers ancient as the world and older than the flow of human blood in human veins.

I bathed in the Euphrates when dawns were young.

I built my hut near the Congo and it lulled me to sleep.

I looked upon the Nile and raised the pyramids above it.

I heard the singing of the Mississippi when Abe Lincoln

went down to New Orleans, and I’ve seen its muddy

bosom turn all golden in the sunset.